On January 6th, 1592 Art O'Neill, his brother Henry, and Red Hugh O'Donnell made a bid for freedom to the remote Glenmalure Valley over 50km away from the Dublin Castle, where they were imprisoned by the English. O'Donnell successfully reached a safe-house in Glenmalure, where he found refuge (he had lost both big toes to frostbite). Henry was separated from the other two and Art O'Neill had died of exposure in the mountains only miles from his goal. » read more 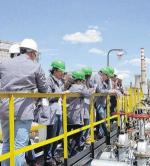 EPA Guidance on Financial Provision for Environmental Liabilities now finalised - What does it mean for Licensees?

Following an extended period of consultation with licensees, industry groups and other stakeholders, the Environmental Protection Agency finalised and published its "Guidance on Financial Provision for Environmental Liabilities" in mid-September 2015. » read more

On 14th July 2015, Environment Minister Alan Kelly signed into law the European Union (Environmental Impact Assessment and Habitats Regulations) 2015 and the Planning and Development (Amendment) No.2 Regulations 2015 and with it brought some clarity and potential well deserved relief to many quarry operators and the industry. » read more

Inward Investment in Ireland - The Role of the Environmental Advisor

Environmental legislation in Ireland differs significantly from that of the USA or other countries. As an Inward Investor in Ireland you need the expertise of an Environmental Adviser in Ireland to ensure that your investment: - Achieves Environmental Permitting in the required timescale, and; - Obtains a Permit which is cost effective and practical to operate without excessive capital and operational costs. » read more

The Seveso III Directive has now come into operation in Ireland (as of 1 June 2015), with significant consequences for the operators of Seveso establishments. » read more

AWN has prepared a detailed submission highlighting some very significant issues such as the impacts on the protection of Intellectual Property and the impact on the ability of Pharmaceutical, Chemical and other sites to change inventories. » read more

As the country transitions to a new Water Authority there is great uncertainty about the future cost of water. As water charges for domestic users have been revised downwards, industry can expect water and wastewater costs to increase over the next five years as Irish Water will require additional revenue to fund necessary improvements in our water infrastructure. » read more

2015 will be a busy year for permitted facilities and sites presenting major accident hazards (SEVESO) at a time of significant capital restraint. The EPA is requiring €1m+ to cover site closure liabilities and ruling out insurance and parental guarantees in most, if not all cases as financial instruments to underwrite liabilities. » read more